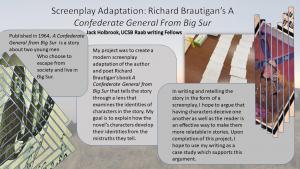 Abstract: Thisproject, A screenplay adaptation to the 1964 fictional Novel A Confederate General from Big Sur has been particularly exciting to work on due to the different parts or the writing process it has brought me through. The book,being the first piece of fiction written by the late beat poet and writer Richard Brautigantells a story that is applicable to the 21stcentury as it follows two young men who choose to leave society and live in the relative isolation of Big Suralong the coast of California. While society has changed greatly since the book was first published, disillusionment in one’s own place in the world and the lure of escapism, especially for young people remain popular literary themes more than fifty yearsafter. In research how to write the screenplay, I extensively followed the method’s outlined in Blake Snyder’s instructional book Save the Cat.

In creating this screenplay adaptation for the original novel, I hoped to capture that same spirit original to Brautigan’s text that shows how these characters who escape from the city are changed when they begin a very different livelihood in Big Sur. The Screenplay adaptation also incorporates elements from Brautigan’s other works of fiction. These include Revenge of the Lawn and Trout Fishing in America. While the screenplay references neither of these stories explicitly, the anthological style of bothworks lend themselves well to creative writing. Across his works, Brautigan emphasizes the role of imaginationin both his characters and towards the reader. In writing his screenplay I also tried to create a story that would make the readers use their imagination.

The story of A Confederate General from Big Suris certainly an obscure piece of literature today,however by re telling this story for a modern audience I hope to allow readers to escape to a life in contemplation just as the characters of this novel did. The original novel remains a fantastic story and the goal of this modern retelling is to keep thespirit of the tale while making it engaging to a modern audience.